It troubles me a great deal to know that these islands (and many other similar islands and lowlands), are being threatened by the increasing water levels of the oceans. At this rate, pretty soon these Indigenous cultures will have to be absorbed by the mainland, which is bound to be a cultural disaster.
With a lot of pleasure (and a bit of envy!), may I share my translation of an Argentine colleague’s article about her visit to the famous mola territory. Marta Arancio is a textile artist living in the very textile province of Salta, Argentina. Here are her impressions after a three-day trip to San Blas Islands in Panama. Hope you like this article as much as I do.

ARTICLE WRITTEN BY MARTA IRENE ARANCIO, AND TRANSLATED INTO ENGLISH BY SILVIA PIZA-TANDLICH.

For over 27 years I anxiously awaited a chance to visit this peculiar area in Panama: The KUNA YALA territory.

A small plane had the thirty minute task of taking me along with four other passengers, from Panama City’s Gelabert de Albrook airport, to El Porvenir Island in the San Blas Archipelago on the Atlantic side of Panama.

My friend Laurie, with know-how, admiration and contagious passion for the textile work of the Kuna women, booked my itinerary and talked to contacts in San Blas.

Laurie’s kindness  allowed me to be met by Eric at the El Porvenir Island airport, taking me by cayuco (a type of kayak) all the way to Nalunega Island where, at last!, within a few minutes I was surrounded by several women, all anxious to receive those packages of fabric quarters gifted by Laurie for their usual attire.

Laurie’s kindness allowed me to be met by Eric at the El Porvenir Island airport. 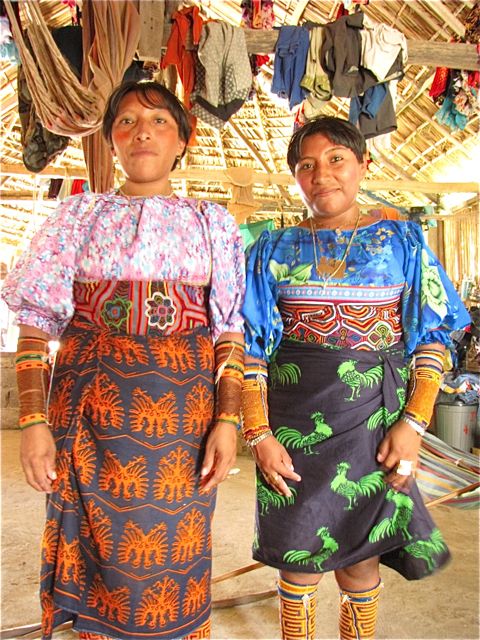 Thus, being surrounded by women was to become the norm for the next three unforgettable days. If these look like female islands it is due to the men leaving to work outside—in the campo—in order to bring food and money home. Women stay home cooking, doing laundry, caring for children, and dedicating a great part of the day to their traditional trade: mola stitching, which is mostly a social endeavor.

The great bohío huts are always clean, with clothes and hammocks hanging, showing only cooking utensils on the floor, a few toys, the stove…

Some baskets for threads, needles, scissors, fabric remnants and some mola in progress are also visible inside dwellings.

The mola is a precious rectangle intended to become part of a blouse, in which case two identical molas are used—using the same design and color scheme, one in front and one in back. The blouse is made with gauze-like, flowery fabrics. The attire is complete with a wraparound skirt, and a kerchief to protect their head from the sun. At this point I must describe the multi-color group of elements presented as a characteristic unit, each element with its own function and with amazing profusion of color.

The mola, handmade piece which is fundamental for the blouse, could gather no less than five or six colors simultaneously, reverse-appliquéd in successive layers that are articulated thanks to careful assemblage, meticulous hand sewing, and care from the point of view of chosen design. The motifs could be geometrical (generally ancestral, whose meanings escaped me in such a short time although they’re frequently used); animals and flowers; and motifs having to do with contemporary references such as logos, numbers, cigarette brands, or any image they pick up during their exchange with tourists.

The flowery fabrics complementing blouses, could match prevailing mola colors much like complementary hues. Cotton wraparounds are usually two-toned—black or blue background—with green or yellow motifs. And the head scarf is red or yellow.

The attire is completed with winis, which are glass beaded ornaments on feet and arms, with two or three colors and in many cases, showing frets or linked geometric designs.

Young women’s almost permanent smiles were a stark difference from the gruffness of older women during the time it took to study me since like so many curious visitors, I wouldn’t want only what was being offered for sale, but seemed to always be observing them.

They exchanged comments, opinions, smiles, maybe criticism…all is possible when one doesn’t understand or speak their Kunan-Chibché language few visitors could learn. Some sort of complicity or naughtiness shows in their faces and leaves us at their expense: they’re owners of their land, culture and language, which allows them to be cordial and invite us to their table.

The first day with Eric we went to another island where fruit trees could be seen, which are strong in Kuna diet and health care—such as noni fruit.

Although fish is a strong element in Kuna diet, I was offered plantain, yuca (cassava) or mandioca (tapioca), and a small and powerful grilled pepper. Before and after this small banquet we visited their homes under the ardent sun, and got to see their prolific mola production. Today I can share their faces, feet, works, smiles, games, and a “private mola exhibit” thanks to their cordiality, and despite a certain mistrust…in the sand in front of the sea.

I sincerely thank Laurie Bjorjlund Lahey for connecting me to the people of San Blas, and allowing my dream to become a reality.

MORE INFORMATION ABOUT THIS AREA:

The San Blas Islands of Panama is an archipelago comprising approximately 378 islands and cays, of which only 49 are inhabited. They lay off the north coast of the Isthmus, east of the Panama Canal. Home to the Kuna Indians, they are a part of the comarca Kuna Yala along the Caribbean coast of Panama.
The inhabitants used to wear few clothes and decorated their bodies with colorful designs. When encouraged to wear clothes by the missionaries, they followed their body painting designs in their Molas, which they wore as clothing.
The Kuna Indians worship a god named Erragon. They believe that this god came and died just for the Kuna people. The Kuna Indians were driven off Panama during the Spanish invasion and they fled in their boats to the 378 islands around. The chief of all the islands lives on an island called Acuadup, which means rock island. The Kuna are hunters and fishers, they are a very clean people and on some of the islands have opportunities to attend school. Most of the men now speak Spanish, though the women carry on older traditions.